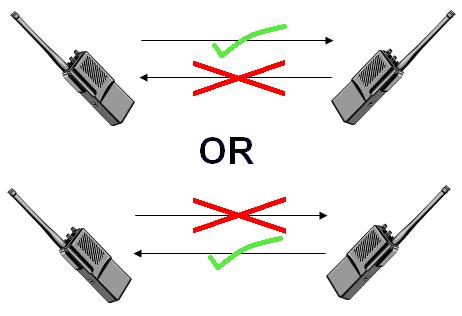 As an Amazon Associate, we earn from qualifying purchases.

Although these terms seem to be complicated, it all just lead to the mere things that people do everyday –hear and watch the news, browse social media, journalism – pointing to just communicating. You probably remember the old movies in which people were talking on a phone and had to wait until the other side was finished. Nowadays, you have a more natural conversation. Let us explain the difference between half duplex and full duplex: Duplex simply means that there are two parties that are involved in one system. This principle is the core for most telecommunication means.

When used in networking, duplex speaks of two devices or two points to communicate with each other. Unlike the simplex system wherein there’s only one line of communication, duplex can give out and receive information. One concrete example of a duplex system is your telephones.

Simplex system only has one line of communication whereby one transmits and the other one receives. One common example of a simplex system is your infrared remote control wherein its IR transmitter transmits signals to device and doesn’t receive anything in return.

For purposes of discussion, this article will also be talking about the types of duplex communication system so that it will be easy to distinguish one from the other: In half-duplex systems, the process of transmitting and receiving information don’t happen    simultaneously, but rather alternately. While the other part is transmitting the other one only meant to receive. Take for example the “walkie-talkie” communication.

On the other hand, full duplex systems make use of two components allowing the two parties to transmit and receive information simultaneously. One very common example is your telephone wherein two parties can talk with each other without having to wait before the other one is done talking. All quality motorcycle intercoms are full duplex as well which allows your to talk freely without waiting for the “over”… When it comes to computer data, full duplex systems occur when the data sent has been truly received and acknowledged by the receiver. This way, there’s a reliable transmission that has been held between the two parties.

Contrary to what has always been known in social media marketing, it’s not purely a broadcast communication but rather a full duplex communication. Broadcast communication is merely one directional – wherein target audiences don’t have the chance to talk back what advertisements are telling because they have no choice but to read it and listen to it.

On the other hand, Social Media uses two-way communication because both parties – the advertiser and the audience have the option to either send or receive the information. This allows the consumer to be well-informed of the product they are about to buy.

However, while full duplex communication system is of great value when it comes to internet usage, it can also cause problems especially when used in Wi-Fi connections.

Interference is something that occurs when one party tries to transmit and receive signal (in this case, your router) simultaneously but will be interfered by the transmission it sends. There are even times when the interference is more powerful than the actual signal.

In Full Duplex Communication System, there is a connection between two parties or devices that are capable of sending and receiving data for both directions at the same time. They may be created as a pair of simplex communication systems or use a single channel that is specifically built to allow bidirectional simultaneous transmissions.